Ski jumping had been king of the winter sports since the turn of the 20th century. There was stiff competition among the communities of Ironwood, Iron Mountain and Ishpeming. Crowds were huge watching the daredevils of the hardwoods ploy their skills in competitions held in these communities.

The Gogebic Range Ski Club first organized in 1935, purchased the property, built the 60 meter ski jump and held the first ski jumping competition on this site in the winter of 1937. Torger Tokle set the standard on the Wolverine Ski Jump in 1942 when he set a record leap of 216 feet which lasted until the upper structure collapsed in the late 1950's in a high wind storm.

The facilities remained idle until the mid-60's when a group of individuals decided to utilize some of the rubble from the old hill to try to build a smaller version of the old ski jump. Rebuilding the ski jump cost approximately $20,000. The entire structure was completed in 1975 with the Wolverine Committee providing most of the labor. The U.S. Olympic team was here to enjoy four days of practice. They loved the hill. Since the hill faced the northwest, there was always a steady updraft which made the hill ride like a much larger one. It was one of the safest hills in the country.

In 1976 the Wolverine Committee submitted a proposal for a DNR grant to construct a five kilometer trail which looped around the hills between the Wolverine site and Grand View Hospital. A second beginning loop was also included to the west of the ski jump. The XC trails became operational for 1976-77 winter season. In 1981 Wolverine Nordic Ski Club, Inc was formed. The club has expanded the trail system, (the Powderhorn trail, Cliff Trail, Cliff Hanger, Ottawa loop) built a warming shelter, a garage and purchased grooming equipment to maintain the trail system. Future plans that have been discussed are creating more beginner level trails and to cooperate with Big Powderhorn Mt. to develop more trails that will link into the Wolverine trail system.

Thank you to Charlie Supercynski for the Historical Perspective where much of this information came from and to John Kusz for the photos and to the many other individuals who kept the vision alive. 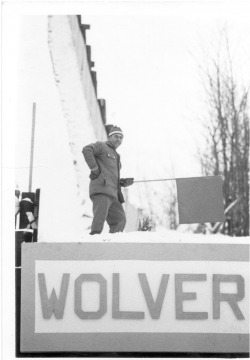 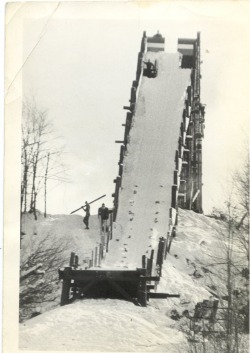 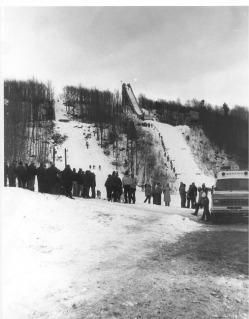